What's Evolving on the Innovation Frontier:

One of the most important trends in the technology sector is the shift from on-premise software to software-as-a-service, or SaaS, for short. The key difference between the two technologies is on-premise software is installed and run at the client’s physical location, while SaaS is delivered from the software vendor to the client over the Internet via a web browser. This change in architecture has created numerous growth opportunities for forward-thinking, innovative companies and has given rise to a new class of software leaders. At the same time, it has challenged the previous generation of on-premise providers to make the jump to the new architecture. Navigating the shift to a new paradigm is often a difficult transition, and legacy vendors have struggled to adapt, leaving the door open for leading SaaS innovators.

Software’s importance to both businesses and consumers has become increasingly important over time, a topic that we discuss in another thought piece called “Digital Transformation.” Processing power has continually increased with Moore’s Law, an observation made by Gordon Moore (co-founder of Intel), that the number of transistors on a chip, and therefore performance, doubles every 18-24 months. This doubling of processing power every two years has enabled exponential improvements in software, driving a shift from software as a mere tool for businesses to, increasingly, the foundation of businesses. Software is becoming the operating system of companies and industries. Said most eloquently by venture capitalist Marc Andreesen, “Software is eating the world.” 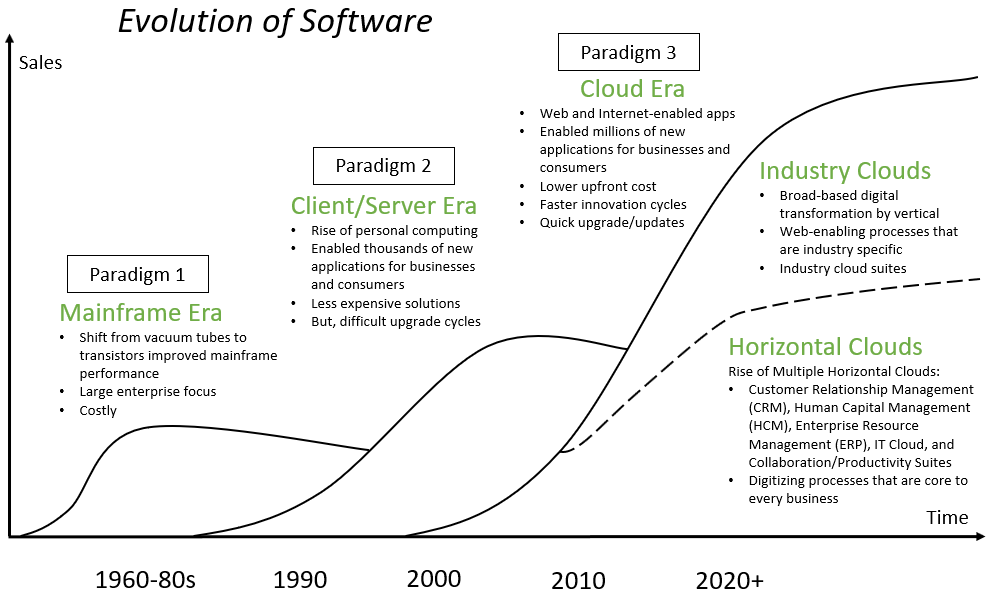 Gartner estimates the total global enterprise software market in 2018 to be nearly $400B, growing over 9% annually.1 While this represents solid growth for such a large market, it does not show the whole picture. If we break down the software market into two segments, on-premise software and SaaS, we see that on-premise is actually flat to declining, while SaaS is the real engine of growth for the entire software market. SaaS industry growth is projected to be in a range of 15-20% per year.

The first SaaS companies emerged in the late 1990s with the founding of NetSuite in 1998, followed by Salesforce.com a year later. It took nearly a decade for the new cloud-based architecture to hit its inflection point and gain significant market acceptance and adoption. There were a number of hurdles that needed to be addressed before companies would make the jump to the new paradigm. One of the main hurdles was security. Companies were terrified by the thought of having their corporate and customer data reside offsite at another location, such as the software vendor’s data center. Other hurdles included the lack of functionality of early SaaS applications, as well as speed and latency. Over time, these hurdles were addressed through faster broadband and demonstrated security. Today, many best-in-class SaaS providers are thought to have better supporting infrastructure and security than individual customers can provide in their own datacenters. Overcoming these hurdles has accelerated the shift from traditional licensed, on-premise software to SaaS.

The SaaS architecture dramatically lowers costs when compared to the traditional on-premise model in a number of ways. First, it has a lower upfront cost for the software via the subscription model relative to a higher initial cost typical of on-premise licenses. Further, by being web-enabled, a company can literally turn on applications, making implementations easier, faster, and more cost-effective. Lastly, fewer IT staff are needed because the software is installed, run, and maintained on the software vendor’s servers, leading to lower overall IT costs. A 2010 study by the research firm Hurwitz and Associates demonstrated that total cost of ownership (TCO) can be reduced by over 70% relative to on-prem solutions by shifting to SaaS.2

But, cost is only one factor, as the benefit of speeding up innovation cycles is another driver of adoption. Below, we review the concept of innovation cycles more broadly, and then apply this concept to SaaS.

Innovation Cycles for Everything are Speeding Up…

The length of innovation cycles—the time it takes for important new innovations to move from ideation all the way through development and adoption—has been decreasing over time. For example, it took centuries for humans to transition from foragers to farmers, enabled by the domestication of animals and the development of farming techniques. These techniques helped increase the supply of food, which over time led to larger populations and settled communities. These were monumental changes spurred at the very heart by innovation, but they happened over centuries. Even just 250 years ago, in the mid-1700s, innovation cycles on average took decades. The rise of steam power and the build-out of the railroad system took many years to develop. Since then, innovation cycles have further compressed, primarily due to the rise of the Digital Age, or what economist Klaus Schwab refers to as the Third and Fourth Industrial Revolutions.3

Companies that can deliver innovation to their customers at a faster rate than their competitors have a distinct advantage. Within the software industry, we are seeing this play out in the shift from on-premise software to SaaS, a key evolutionary shift driving investment opportunity.

In addition to lower total cost of ownership, one of the most underappreciated and overlooked benefits of SaaS is the ability for SaaS vendors to deliver greater and more rapid innovation to their customers, compared to the traditional shrink-wrap or licensed software offerings. 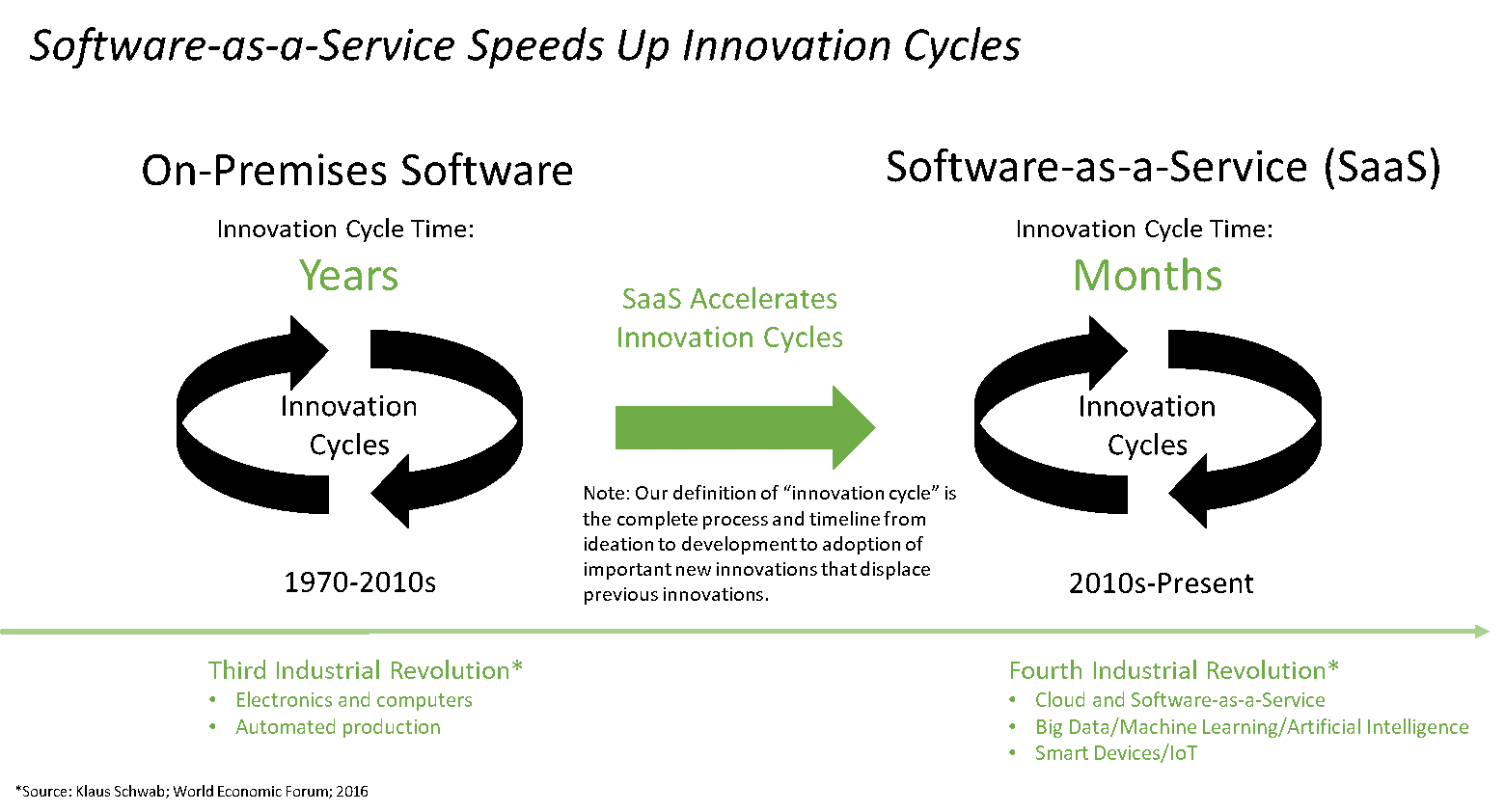 In the old on-premise model customers purchased a software license and installed it throughout the organization (called an implementation), on every computer across the customer’s physical footprint. This process often took months, and company-specific customization of the software might add years of further work. Not only did this process typically involve a number of costly consultants and implementation partners, it was also highly disruptive to business productivity.

Future upgrades of on-premise software further complicated this process and added additional costs. Major upgrades often resemble re-implementations in terms of time, cost, and complexity.4 The customizations during the implementation phases, that took consultants and partners months, or even years to complete would have to be reworked. In the on-premise world, an upgrade was effectively on the same scale as the original implementation.

As a result, many customers have resorted to lengthening the time between upgrades, which slows innovation cycles, and delays the rollout of new software features and functionality. This is especially true for certain types of complex software like Enterprise Resource Planning (ERP), which is not only costly to implement but can also be extremely disruptive to the day-to-day operations of a business. Upgrading the ERP system, which runs the core financial software for a company, is often compared to a heart transplant because of the magnitude of the disruption to the business during the upgrade. Companies often delayed upgrading to the newest software version until they were forced to do so by the software vendor (because the old version of the software was no longer being maintained and supported by the software vendor), or the build-up of innovation and product features was so great that it was finally worth the hassle of upgrading. The result? The average company performs major software upgrades every few years. This slows their ability to take advantage of new innovations and capabilities.

Many SaaS providers strive to create continuity and therefore efficiency, by running a single version of their software for each and every client. All clients are on the same update cycle and get access to new features and functionality at the same time, speeding up all individual customer innovation cycles to one faster cycle. While on-premise providers are spending significant resources maintaining old licenses, SaaS providers are focusing those resources on delivering new innovation. This is compelling to enterprise users, and in addition to TCO benefits, further accelerates the shift to SaaS.

Innovation cycles in the software industry are shortening from years to just months. SaaS vendors can push out new features almost immediately, typically 2-4 times per year. As a result, software is shifting from a cost center to a business and revenue driver. SaaS providers are layering on new products, integrating big data, analytics, and artificial intelligence. Companies making the switch to SaaS are finding that this model offers a competitive advantage because of its ability to speed up their own innovation cycle. The shift to SaaS is one of the most important secular trends in the technology sector, and one we believe will generate sustainable growth for leading SaaS companies over the next decade.

Disclosure: The secular trends and/or innovations highlighted in this White Paper or Thought Piece have been selected based on objective, non-performance selection criteria, solely to provide overviews of secular trends and innovations that may, at the time of publication, be components of portfolios managed by the firm. The mention or discussion of specific companies or stocks in this White Paper or Thought Piece does not constitute a recommendation to buy, sell, or take other investment action with a particular security. We reference companies to provide examples of the secular trend, evolutionary shift, or innovation being discussed. There can be no assurance that we have owned, currently own, or will own any of the companies mentioned in this or other thought pieces or articles.

Insights from Our Team